Hieroglyphika is a turn based rogue-like developed by M. Hanka. It features an impressive art style and is a slower paced game (due to the fact that multiple enemies have to take turn every round).
A steep learning curve and high difficulty suggest that this game might suit old-school veterans of rogue-like games. The developer explicitly stated that there is no handholding and as the name of the game suggests, no textual explanations, only pictograms which have to be uncovered via trial & error.
After reading reviews I saw that this game deserved more awareness, especially since it was developed by a single person.
Reviewers liked the game, almost everyone praised the pleasing visual art style and its ominous feel to it. The GameRant review quoted at the end: “Hieroglyphika proves to be a highly engaging experience” 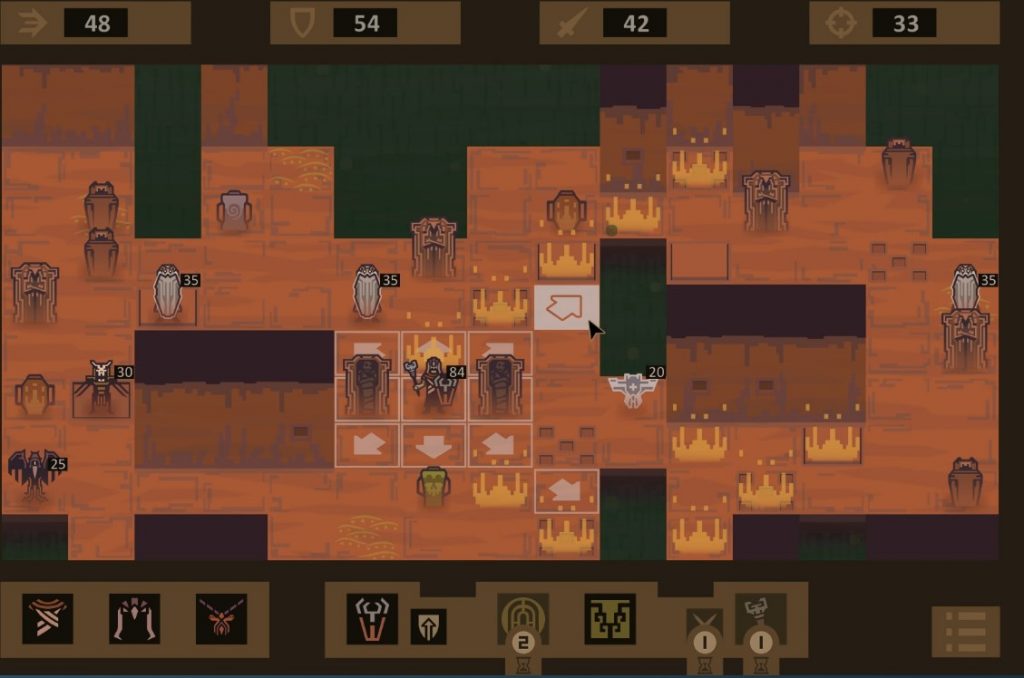 First things first, the Website convinces with its simple design but falls short on multiple important aspects. First and most importantly, lack of press kit. Without one, expect no organic coverage of your game. The first thing you see is the logo of the game followed by a trailer with the exact same picture. A suggestion here could be to have the trailer as the first introduction of the page since you don’t have much time before people bounce off your website. The trailer itself looked captivating enough in the first 20 seconds (the rest isn’t nearly as important).
Another important thing missing was any kind of Blog or Social Media link (or in that regard any information about the developer at all).
Another thing that could have added more value to fans is a sub newsletter for later updates.
The screenshots were well chosen and represented the game in a good way.
Search Engine Optimisation, although a factor I try to keep in mind, isn’t really important when there are only about 150 words on the whole website. 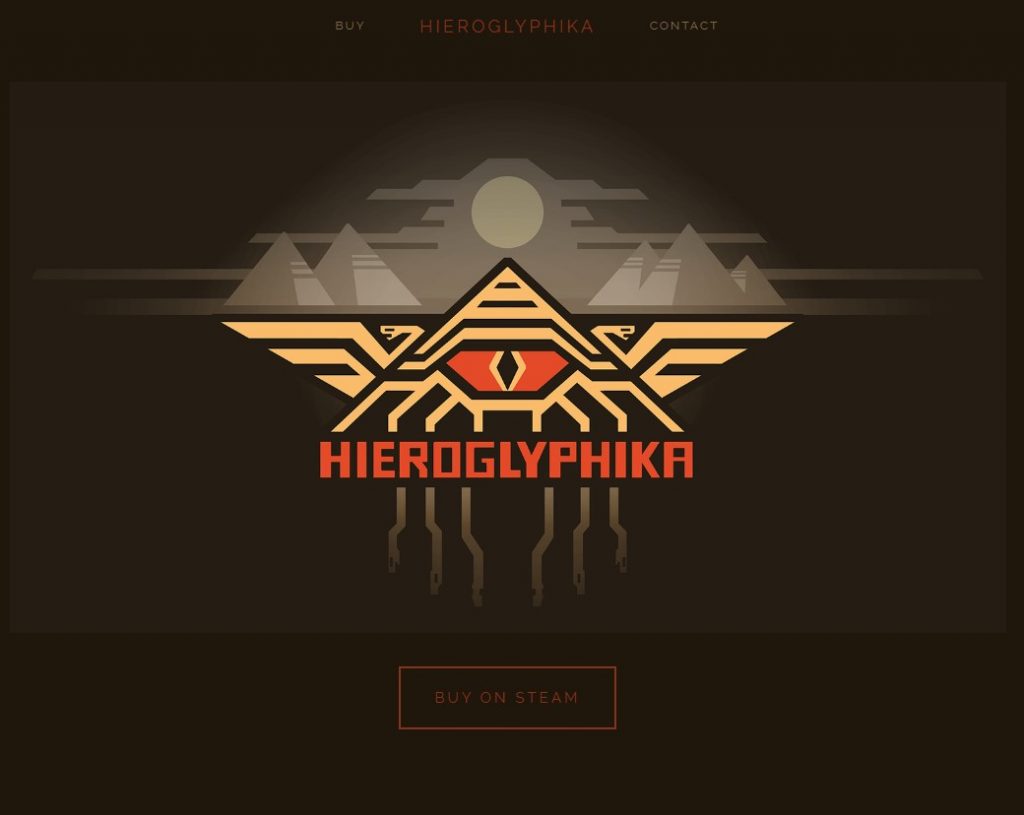 One of the most baffling things about the marketing “campaign” on this game was the Social Media presence, I had to search manually and only managed to find a Youtube channel with two videos (a greenlight and a release trailer). No sign of Twitter or Facebook. There were hashtags of Hieroglyphika trending but no Twitter account associated with it. Even the steam profile of the developer was private. There was an IndieDB page with 3 published posts within 3 months prior to the release (way to short of a time frame for an announcement). There was so much room for footage and gifs that could have been shared on Twitter or Facebook on a daily basis.

Due to the lack of any Social Media presence and Blog on website there wasn’t really content at all. So I had to judge based on the small snippets on the Greenlight and Steam page which were surprisingly well written and actually captured what I thought and heard of the game.

There was an obvious effort made by the developer to reach out for Youtubers as well as press coverage. It received a decent amount of articles (my guess provided by the developer) by large media outlets such as Rock, Paper, Shotgun which were provided with a demo and “wanted to play more of it.”,
Gamerant (who were provided with a code), 4players (German) and digitallydownloaded.net who reviewed the game. 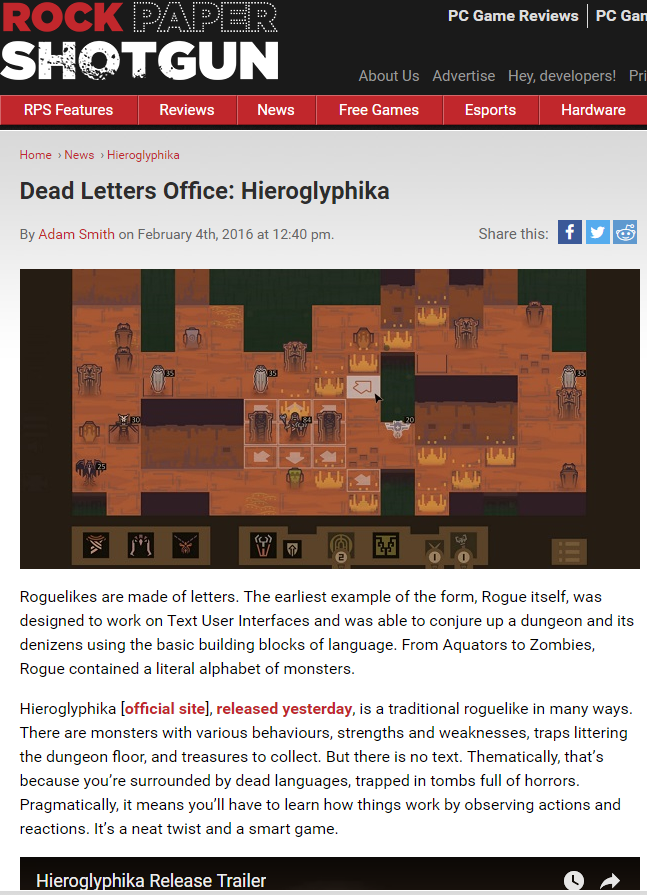 Many smaller Youtubers covered the game, especially the ones with a focus on rogue likes and unknown indie titles with an average subscriber range of 100-2500 but even people with over 23.000 decided to make videos about it. Almost all of the Youtube coverage was in form of Let’s Plays, barely any reviews but that is not necessarily bad.

Most of the articles and videos were released right around and shortly after the release date of Hieroglyphika. There was no video prior to the release date, no footage at all which shouldn’t happen since people could have been shown gameplay videos months earlier. The actual greenlight release video with gameplay was only uploaded a month before release. 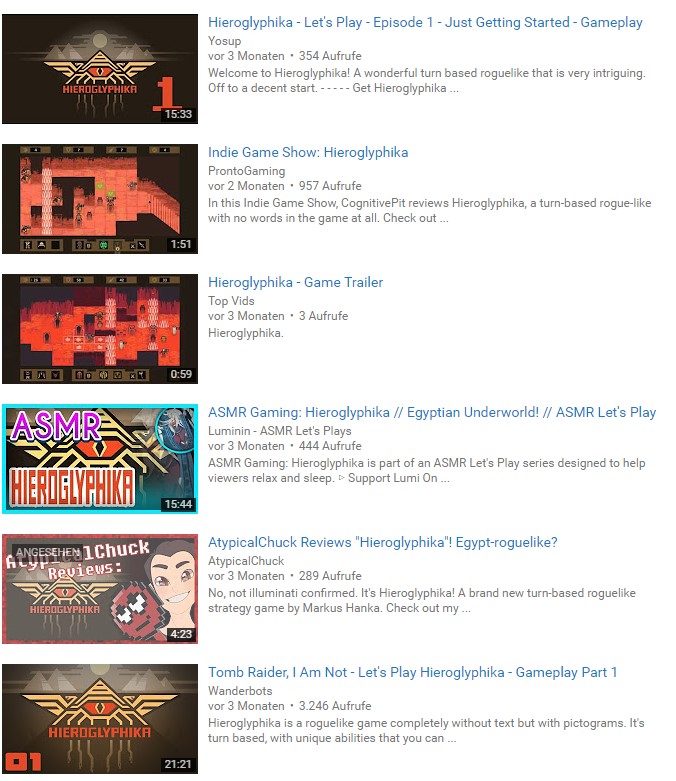 The Greenlight obviously worked, probably due to its convincing gameplay and art style.
It attracted barely any press coverage (only the Germany article on 4players.net) in that timeframe and still received over 200 positive comments.
Only 115 words of description were provided, which is sufficient but could have been improved with image headers showcasing enemy types or items you can pick up. This is me nit-picking though because it got greenlit in the end anyway because of its high quality.

The developer provided hotfixes and patches shortly after release with requested features but dropped its communication and support quickly after and hasn’t replied on steam in 2 months.
Studies showed that post release content can spike interest rate in your game even years after release.
According to the developers Reddit account, there is an update planned to rollout in the near future but the lack of communication via Social Media and Steam leaves out any community fostering that could have happened.

Sadly one of the major mistakes were the game release date due to XCOM 2 which was targeting similar genre fans and could have gotten attention. Comments from users on Rock,Paper,Shotgun suggested that they would have been interested if not for the unfortunate release date favouring XCOM 2.
I can’t judge the press kit because it wasn’t available anywhere and was apparently only accessible by contacting the developer directly.

Other than that I was not able to find any Kickstarter project as well as indication of any physical booth presence to further promote the game.