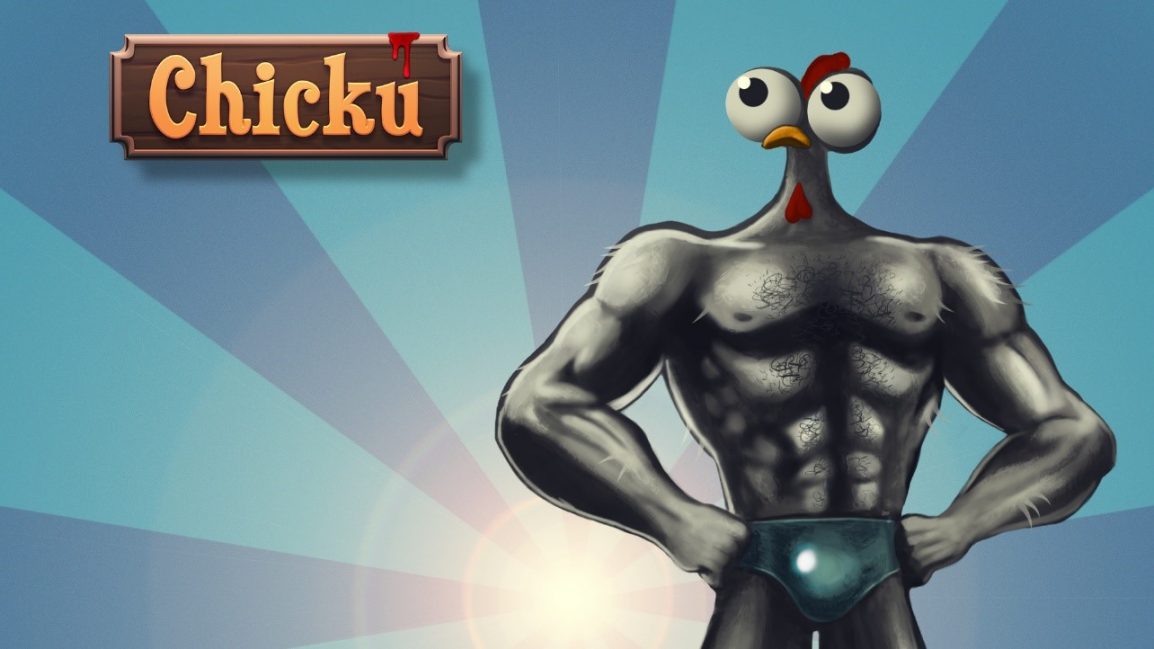 I decided to review Chicku due to its potential I saw and heard from Youtubers and how little I actually heard of it since release. It could have had a bigger impact so I tried to find out what stopped it from raising more awareness about its morbid hilarious art style.

The game is developed by Gatling Goat Studios and just left early access on the 5th of May. Chicku is the second game the developer released and is (unlike the first game) self-published.

Chicku is a puzzle platformer with a lot of gory elements. You can clearly see influences from Super Meat Boy as well as Flappy Bird with its control scheme, a high difficulty but with a well-designed difficulty curve lets the player learn on smaller puzzles every obstacle of the game before you are thrown into seemingly impossible levels.
The Flappy Bird controls might make it look shallow but it isn’t as gimmicky as it may look at first, additional moves like a charge are early introduced and add a mixture of variety to the diverse level design. The scenery of the game is hilariously fitting while trying to escape with your chicken you have to get out of meat grinder and other farm-horror levels.
Couch Co-Op with up to 4 players make this a great party game for pick up and play.
Also, there are hats for customization, who doesn’t love hats?! 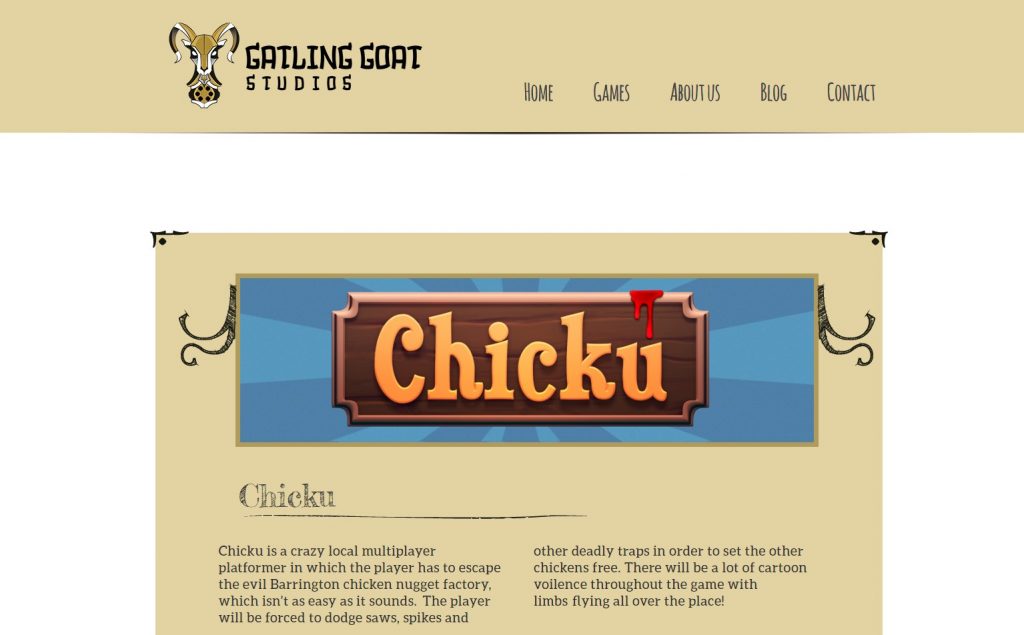 There wasn’t a press kit anywhere to find, having one is almost as essential as your game and is a priority for every developer who wants any organic press coverage.
Screenshots and Gifs on the landing page besides a trailer help as well to show well-chosen gameplay demonstrating most fun aspects of the game.
Social Media links were integrated and directed to the desired channels.
Another thing I was missing was any call to action for the game (link to steam or Itch.io) or a Blog that didn’t link to a 404.
A thing that could also add a little exclusivity for die-hard fans of your game (which you want to have) is mail subscription to keep them in the loop about updates and exclusive features or giveaways.

The developer did a decent job on their Social Media marketing. Facebook, Twitter, Youtube as well as an IndieDB page. There was even an effort to create a Chicku subreddit but it didn’t really pick up (which is way more difficult because it needs a steady community).
Most channels were updated and supplied with fitting content.
The individual posts were fitting and actually funny and witty. 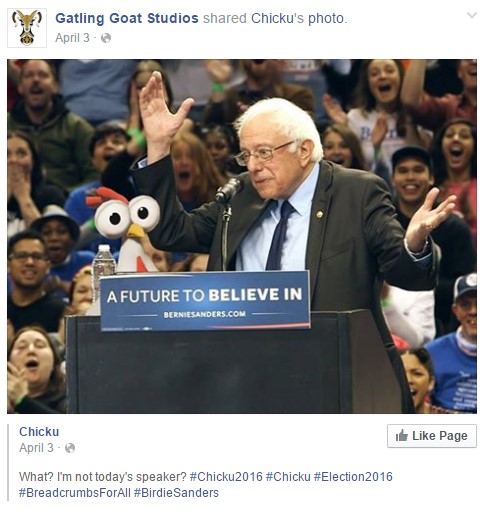 Problem was their infrequency, the Twitter page didn’t have a post in between the 30th of April and the 7th of May, which was their release window leaving early access and should have had at least two posts a day spreading the word.

A larger variety of posts like the BirdieSanders image as well as more engaging posts like giveaways and fun questions to answer by your playerbase would have increased visibility especially during the time of release.

The content strategy became clear as soon as one sees the game, focus on the morbid humor.
Gatling Goat Studios did exactly this but more in that they shared funny Let’s Plays, which is totally legit if you mix it up with original content (like the Birdie Sanders post).
Fan contests with “Post your funniest death gif” could have created more laughs and shares.
The blog on the homepage was a dead link, which is sad because a development blog can help peak interest rates especially before release and lead to more press coverage (also makes your greenlight phase much easier).
But overall I got the overarching message which was high difficulty, gory/hilarious goofy content.

There was a clear effort for more coverage made by the developers. A lot of Youtube Channels started picking up Chicku with Let’s Plays due to its easy and yet hilariously frustrating gameplay.
Even bigger Channels started series of the game like Draegast (over 800k subs) who posted videos achieving over 150k views on a single Let’s Play.
Accumulated views of over 850k on only the first 2 pages of Youtube.

The Press picked started covering the game as well with media outlets like Rock, Paper, Shotgun or Gamespot.
The timing of most of the coverage was around early to mid April, which was right around their early access launch window.
It could have probably picked up a little more attention organically with a clear press kit on the website.

Booth presence at conventions and gatherings:

Gatling Goat Studios went to Dreamhack to show off their co-op gameplay to people. As usual it is quite difficult to tell the range of impact the presence of conventions has but its always a good effort and doesn’t hurt your marketing plan (if it doesn’t bring a huge budget expense with it). 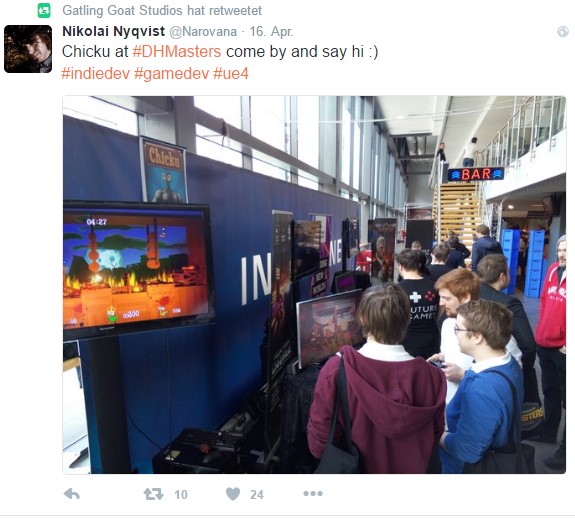 The trailer used on the website (which was way to slow) was also used on greenlight which shouldn’t happen because you have less time on greenlight to convince people for their YES vote.
The elevator pitch was actually fun to read and summarized the game quite well 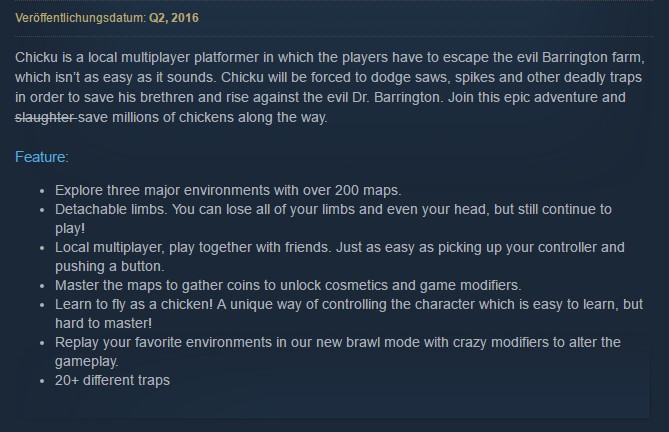 Nevertheless the game achieved rank #6 on greenlight simply due to its convincing gameplay and was put on steam with over 6300 YES votes. It linked correctly to Chicku’s Social Media channels.
The developer even had an AMA on greenlight which is always commendable because it increases trustworthiness and adds personality to the game.

Can’t be judged yet since the game is only out for a week. Overall there were 5 patches with several bug fixes within the early access phase of one month. The developer engaged a lot in steam discussions which I personally always like as it opens up a dialog to influence the game directly as a fan (community fostering).

The window for release was okay-ish. No real other platformers were competing with the game in mid april but sales numbers still might be influenced by the Dark Souls 3 release shortly after the early access release.
The price tag of 13€ is also only okay-ish, I personally feel that a 9,99 price tag could have gained more attention because people are more likely to jump in (which in return creates word of mouth and a larger community)